The button below brings you to the bookstore webpage for this book: 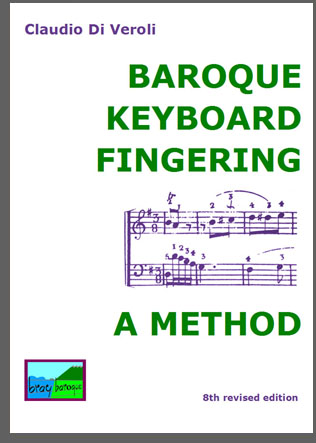 This is a traditional-fingering method for students and performers of Baroque keyboards.

Old-style fingerings are also suggested by the author for many difficult passages in the Baroque keyboard repertoire.

After the first version of 1983, enhanced versions of this Method have received very favourable comments, including an endorsement by the late Igor Kipnis.

This 7th revised edition, published in August 2016, is based on decades of studies and practical use in public recitals, and is as always the most comprehensive work in the field, with 176 fingered passages and a bibliography of sources. Bray Baroque has also published the following companions of this eBook:

A comprehensive set of Baroque keyboard pieces, fully fingered according to the principles expounded in the book Baroque Keyboard Fingerings: A Method. The scores range from easy to advanced and cover most of the technical difficulties and tonalities found in the Baroque repertoire.